Agam Kuan – The Unfathomable well! This is one of the oldest archaeological site in Patna and is an important relic of the Maurayan Empire. It believed to be built by the famous Maurayan emperor Ashoka (268-232BCE). Ashoka was one of India’s most powerful ruler and his empire stretched from the Hindu Kush Mountains in Afghanistan to Bangladesh in the east and from Assam to the Southern India. It is situated south-west of Gulzarbagh Railway Station, close to the Ashoka’s Charitable Hospital, Kumhrar complex, in east Patna. This site is barely one kilometre away from the archaeological ruins of Kumhrar Park. 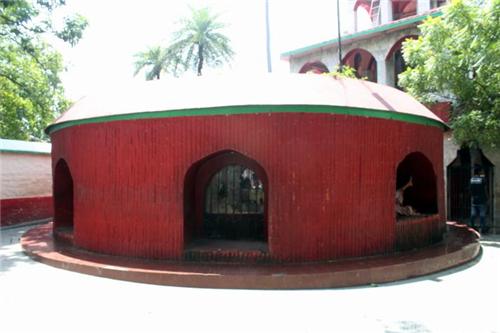 One of the popular legend surrounding the well is that Ashoka killed and threw his ninety-nine elder brothers in this well in his quest to obtain the throne of the Mauryan Empire. According to Jain legends, a Jain monk who was thrown into the torture well, floated to the surface and was found seated on a lotus flower. However Agamkuan is still regarded as auspicious place and many religious ceremonies, including Hindu weddings are still held here. The water from this well is considered to be endowed with miraculous power.

Other popular belief is that emperor Ashoka, had tried emptying the well, but even after repeated attempts the well couldn’t be emptied, hence the name -Agam Kuan, which is believed to be a part of the legendary hall created by Ashoka. During the 5th and 7th centuries A.D, Chinese travelers including the famed Fa-Hien had reported about a torture practice carried out by emperor Ashoka. Elaborate torture chamber were built by King Ashoka, that were disguised as a beautiful palace with exquisite features and elaborately decorated with flowers, fruit trees. These were known as Ashoka's Hell as the torture practices carried out here and the architectural style of the place was inspired by descriptions of the five tortures of the Buddhist hell. Laurence Waddell, famous British explorer in 1890s also confirmed that Agam Kuan once was part of Ashoka's Hell.

The structure of Agamkuan is circular, with a depth of 105 feet and a diameter extending over 20 feet and 2 inches. The upper half of the well is cladded with brick (down to 44') and then from there on it is secured by a series of wooden rings. The most distinctive feature of the well is its surface structure that covers the well. It has eight arched windows.

Near by Religious Structure

Close to the Agam Kuan lies the Shitala Devi temple. The deity here is Shitala Devi and the temple houses the pindas of the ‘Saptamatrikas’ (the seven mother forms). Devotees flock this temple for seeking cure from smallpox and chicken pox, and also to fulfil their wishes. This site is also significant archeologically as several ancient and medieval sculptures (one of them is the famed Yaksha of the Mauryan art-affiliation) was believed to be present at this site.

How to Reach Agam Kuan ?

Agam Kuan is located at the outskirt of the city, near to Mahatma Gandhi Setu. It can be easily reached by private cabs or autos.

Nearby Places of Interest

While traveling to Patna never miss to visit this famous historical site dating back to Mauryan period. Easy to access it is a must visit site in Patna. The best thing about this place is that many famous religious and monuments and palaces are located in and around the structure letting you to explore more about the heritage of the ancient city of Patna.


Explore more about About Patna