Golghar literally means 'Round house'. It is a spherical shaped building, which is located to the west of the Gandhi Maidan in Bankipur area of Patna. Golghar came into being because of a devastating famine in 1770 which killed nearly 10 million people in the regions of Bengal, Bihar and modern day Bangladesh. Alarmed by the catastrophic impact of famine Captain John Garstin of East India Company in the year 1786 built this huge granary for the British army. You will be surprised to know that the orders for building this massive structure was given by the famous Warren Hastings, the Governor-General of India during that time for the purpose of storing grains for the British Army.

Golghar one of the most famous sites in Patna is shaped like a beehive and the design was conceived and built by Captain John Garstin, an engineer with the East India Company. Golghar with large storage capacity of 140000 tons of grains is one of the most massive food storage structure in modern history. It was inspired by the Stupa architecture of the ancient India. The height of Golghar is 29 m and it has been constructed on a two feet high plinth. The walls have a thickness of 3.6 at the base and the foundation of Golghar is 125m. The Golghar is an architectural marvel as the structure is pillar less. There is a winding stairway around this monument which offers a scenic view of the city and the river Ganga flowing by the side. This stairway has 145 steps and was designed to facilitate the passage of the workers. 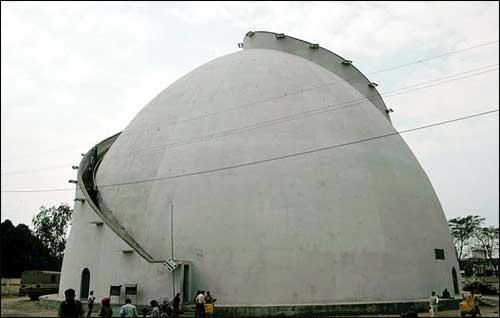 The workers were supposed to carry grain-bags up to one flight of stairs, then they would deliver their load through a hole at the top, and descend through the staircase on the other side. The construction of Golghar was completed on 20 July 1786. At the time of its construction, Golghar was once the tallest building in Patna. However there is a flaw in the design as the doors are designed to open inwards, hence Golghar can never be filled to its maximum capacity. If done so, the doors will not open.
In 2002, beatification work on this structure was undertaken.
Golghar looks like a huge Easter egg from a distance and the spiral staircase resemble the decoration on the top of the egg. This is a must visit place for travelers who want a glimpse of British architecture in modern Patna. Also a breath taking view of Patna city and the river Ganga awaits the travelers who climb up the spiral staircase.

Golghar remains open throughout the day.

How To Reach Golghar in Patna ?

Golghar being an important landmark is almost synonymous with Patna. This famous monument is situated a little west of Gandhi Maidan, approximately 1/4km.It can be easily reached by private rented taxis, autos and buses.