Kumhrar, also known as Kumrahar, is located in the city of Patna and consists of the archaeological excavation of the old city of Pataliputra. It holds the pride of being the ancient capital of Ajatshatru, Chandragupta and Ashoka. It is located six kilometres from the Patna railway station, on the Kankarbagh Road. Excavation findings here have been dated back to 600 BC. The relics found here range from four continuous periods from 600 BCE to 600 CE. Kumhrar is a must visit place for those who want to experience the glorious past of Pataliputra. The excavation carried out by the archeologists have made revelations about it glorious past and its association with the Mauryan age.

Excavation and Important Revelation at Kumhrar

Kumhrar has been excavated numerous times in the past. Excavation work, carried out by D B Spooner in 1912 -1915 revealed numerous relics. A pillar of polished stone and fragments discovered at the site is supposed to be a of an hypostyle 80-pillared huge hall belonging to Mauryan period, dating back to 400 - 300 BC. The excavators were able to trace 72 pits of ash and rubble on the site that helped in marking the position of the other pillars in their original place. 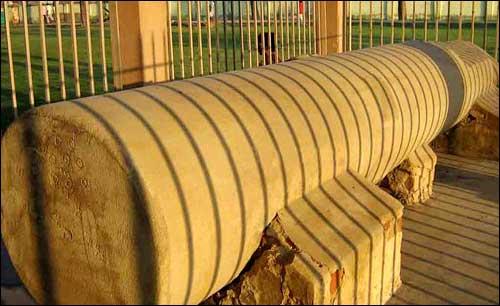 With the discovery of eight more such pits by K P Jaiswal in 1951-1955 it attained the present name–Assembly hall of 80 pillars. Four additional pillars belonging to the entrance were also found. The pillars were arranged in rows of 10 from East to West and 8 from North to South, inside the hall. The entrance of the hall was located towards the South. The pillars were made of sandstone, which was quarried from Mirzapur district in Uttar Pradesh.The pillar were monolithic and had a lustrous shine, which was very typical of the Mauryan period. The height of each pillar was about 9.75m.Some part (approximately 2.74m) of the pillar was buried under the ground. The pillar were erected on square shaped wooden base. The material used for the floor and roof of the hall was wood. About 30 steps were present near the entrance which connected to the canal flowing beside the hall. The canal was connected to river Son. This staircase is believed to be used by important guests who came to the hall via Son river in boat. An excavated pillar has been preserved in the nearby park for public viewing.

Currently, the excavation site is filled with sand to protect it from erosion. The use of this hall has been controversial. According to belif it served as parliament of Chandragupta Maurya and is also held as a place where Third Buddhist Council which was held in 250 BCE, in Patiliputta (Patliputra). It is a protected monument of National importance and is maintained by the Archaeological Survey of India (ASI). One look at the remains of this hall can transport us back to many centuries.This hall is a fine example of Mauryan architecture.

Another important find at this site is the foundations of a Buddhist monastery made of bricks. Few clay figures and wooden beams were also discovered here, which are on display for the visitors at the neighboring park. 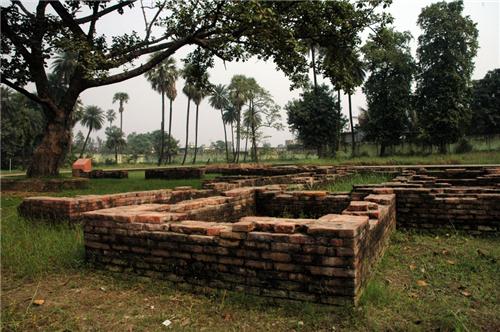 During the excavations at Kumhrar the existence of an Arogya Vihar, which functioned as a hospital and a monastery got discovered. This is based on the finding of a small oval terracotta sealing with inscription in Gupta Brahmi script that read "Sri Arogyavihare Bhikshusamghasya" the hospital is believed to be headed by Dhanvantari, the renowned physician of the Gupta period, who is considered to be the source of Ayurveda (the ancient Indian science of healing using herbs and plant extracts). This deduction is based on the finding of a small potsherd with an inscription that read "Dhanvantareh". Plenty of articles ranging from coins to ornaments have been recovered from this site. The excavated site of Arogya Vihar is believed to consist rooms that measured 3.20 m x 3.10 m and 6.50 m x 3.10 m.In order to protect this site from further erosion, it has been covered. A brick structure has been constructed here for the tourists.

Excavations by Wadell in 1890s also revealed a detached piece of a carved stone railing of a stupa. It had the carvings of female figures on both the sides, hence the name, 'Durukhi' or 'Durukhiya' (double faced) Devi was given to it. This is a fine specimen of Shunga art of the Shunga empire. The figures are seen grabbing and breaking branches of trees, known as Shalabhanjikas (the breaker of branches), ( it is believed to be a part of a fertility ritual done by young women). These artifacts were later taken to Naya Tola (Kankarbagh), a kilometre west to the site, where they are presently worshiped in a temple-like structure. The Patna Museum also holds a replica of these artifact.

The Government of Bihar promotes school trips to this site in order to encourage students to learn about the ancient history and culture of India. An entrance fee is Rs. 5 is charged for Indian nationals and Rs100 for foreign nationals. The artifacts taken out during the excavation are preserved at the Kumhrar Park’s museum.The park timings are from 9 AM to 5 PM on all days except Monday. Kumhrar is located 6 kilometres south to Patna railway station on Kankarbagh Road. It can be reached by auto rickshaws which are easily available from the Patna junction.


Explore more about About Patna