Museums are a way to preserve important historical evidences, documents, artefacts, etc. so that future generations can catch a glimpse of the bygone era. It gives us an understanding of the major happenings, culture, lifestyle, art, traditions and religious beliefs of the people in those times. If you are planning a trip to Patna then do set aside some time to explore the Patna Museum to get glimpses of its royal past. Also known as the 'Jadu Ghar' the museum is very well maintained and houses unique things of great historical & archaeological importance. This archaeological museum in Patna boasts of a large collection of items which were discovered during the various excavations at different sites across Bihar. 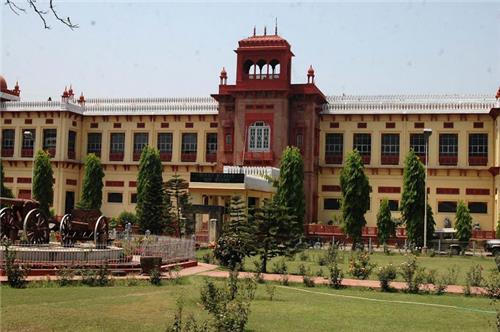 This famous museum is located at a distance of about one km from central and is quiet popular among the local residents as well as tourists coming from outside. The archaeologists and historians had discovered many things belonging to pre-historic times and needed a place to keep these safely. Thus the Patna Museum is playing a key role today in safeguarding & preserving many rare objects ranging from sculptures to terracottas, paintings, coins and more. A statue of Sir Edward Gait, the founder of the museum has been installed near the entry gate, besides statues of other personalities like Lord Hardinge.

The idea of building a museum came up in 1915, to preserve the exclusive historical artefacts found in and around Patna after the separation of Bengal & Bihar. It was founded by Sir Edward Gait the then Lieutenant Governor of Bihar and the construction started in 1917 during the British rule. The museum has been established in a huge & magnificent two-storied building designed by Rai Bahadur Bishnu Swarup. It has been built in an amazing combination of Mughal and Rajput architectural styles. The two floors of the museum have been divided into different Galleries to effectively & properly display the items:

Patna Museum also known as Jadu Ghar (Magic House) was constructed during the British rule to preserve the remains of the state’s artifact. The architectural design of the museum reflects the Mughal and Rajput style.The museum has restored many things related to Dr. Rajendra Prasad, the first President of India who was originally from Bihar. It has the finest and rarest collection of paintings of British period and also has a cannon of First World War. The historical objects that are on display are archaeological objects, paintings, coins, textiles, instruments, sculptures, bronze images, and Buddhist and Hindu artists’ terra cotta images.

Counted as one of the biggest museums in the country, The Patna Museum or Jadu Ghar as it is locally called houses a beautiful collection of about 45,000 exhibits belonging to pre-historic, medieval & modern times. Some of the splendid collection in the museum comprises of following items.

One can explore the museum and marvel at the rare artefacts; after a exhausting tour of the museum grab a bite at the cafeteria - Sangrahalaya Vihar run by the Bihar State Tourism Development Corporation. One can also buy gifts for their loved ones from a HHEC managed souvenir shop present in museum. A huge auditorium, called the Jan Nayak Karpuri Thakur Auditorium is also present in which tourists can watch an event if currently going on.


How to Reach Patna Museum ?

The museum is on the Buddha Marg just near to the Indira Gandhi Planetarium; one can take an auto or taxi to reach this place.

So, if you are an avid lover of history or just want to do spend a day at this famous museum and learn more about the rich culture and art forms of days gone by. A beautiful green park surrounds the museum which is a treat to the eyes and much admired by the visitors.